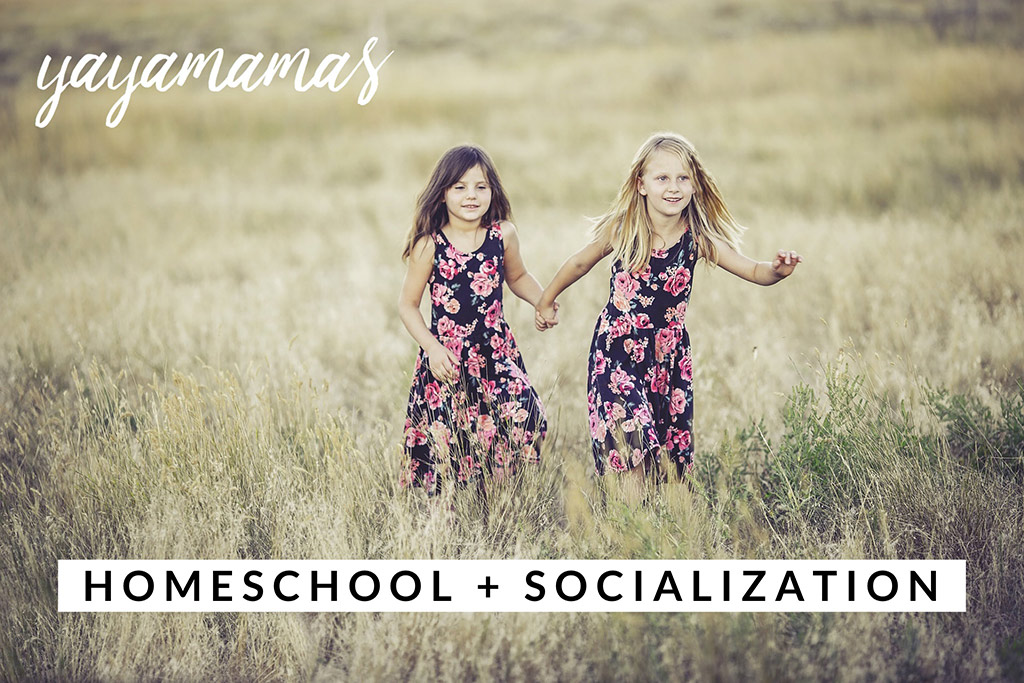 It’s Groundhog Day which makes me think of the Bill Murray movie where he lives the same day over and over until he “gets it.” Sometimes when I mention to others that I homeschool my children, it feels like that kind of Groundhog Day. It often plays out like this:

Person: (When they see us at the store on a weekday) “No school today?”

Person: “Oh. But what about socialization?” (Followed often by, “I could never do that…”)

Granted, I don’t hear it as often as “you’ve got your hands full!” when they see that I have three small kids, but the same glazed over ‘here we go again’ look comes over my face when they start with “what about…”

I do know that the questions and concerns about socialization come out of genuine not knowing. How can you know about a topic that you haven’t had experience with? And why would you ever study it if you don’t intend to homeschool? It doesn’t apply to you. But people speak up about homeschooling as if they do know all about it, including why it can’t be a “good” or viable choice. True story: I’ve heard “I knew a homeschooler once and he was weird” at least twice. This magically makes me weird by association and I shouldn’t homeschool my own kids because of those kids long ago who, when I pried, it turns out they didn’t even really know all that well.

There was a funny meme floating around homeschool circles that said something like, “I don’t always mention that I homeschool, but when I do everyone is suddenly an expert on education.”

That’s kind of what it feels like. Modern homeschooling is a topic that many talk about with authority but actually know little about. I’m sure you can imagine how frustrating it is to be on the receiving end. Instead of having conversations about homeschooling, I end of having to prove that I am making the best choice for my kids and that I “know what I’m doing.” This includes family, friends, and (often) complete strangers.

Truth be told, as a homeschool parent I did have one major concern about socialization—that perhaps we were socializing too much and should stay home more. But then I realized that those concerns stemmed from what other people think homeschool should look like: sitting at a desk at home learning from a workbook. That’s just not how homeschool works for most of us. And I would be doing my children a huge disservice by making choices simply to gain the approval of others rather than doing what works best for us. So I let it go.

The goal of homeschool is not to recreate the public school model at home. It’s about meeting a child where they are and teaching them with an individualized plan. This can look like no desk, a flexible schedule, and other elements that would not work in a large class setting. That doesn’t make homeschooling practices “wrong,’ they just feel unfamiliar to those who don’t use them.

Homeschoolers don’t have to wait for recess to go outside. We don’t have to wait for gym class to move our bodies or play a game. And we don’t have to teach on a set Monday through Friday schedule from 7:30 to 3:30 just because many brick and mortar schools do. These are some of the perks of homeschooling—just like there are perks to all schooling choices. We do socialize, it just looks very, very different than school settings. It’s multi-grade level, multi-generational, and varied in a healthy way. Socialization doesn’t have to look like exclusively interacting with kids of the same age to “count.” You and I don’t only interact with other adults of the same age; our interactions vary. Even kids in school settings interact with other grades. It’s normal for everyone—including homeschoolers.

There Are Always Exceptions to the Rule

There are absolutely homeschoolers out there who could benefit from more socializing. But it is unfair (& untrue) to lump all homeschool families into that category. Just like it’s unfair to lump every public school child in with those who are being bullied. It happens, but it doesn’t happen to every child in that setting.

Imagine this. I run into a mother at the store with her children on any given Monday.

Me: “Oh. But what about bullying? Aren’t you concerned that your kid is being bullied? I could never send my kid to public school. That’s just weird and wrong. I knew a public school kid who was bullied once.”

Ridiculous, right? For the record, I would never say that nor do I think that about the choice to send kids to public school, it’s just an example designed to get the same kind of emotional reaction that homeschoolers sometimes feel when asked about socialization. Questions like that imply that you are not making the best choice for your child or that you are putting them in harm’s way. I could use the example of anything people are concerned about in public or private schools—testing, drugs, peer pressure, anything. It’s the same for homeschoolers when they are asked about socialization—it implies that I’m not making the best choice or that I’m somehow harming my children. It’s easy to take offense…I try not to, but it’s easy to do.

I’ve started to make peace with the fact that perhaps it’s part of my job to be patient with others when they clearly don’t understand my choice. Perhaps it’s my calling to gently educate them about modern homeschool. (But then I get tired of doing it so frequently and frustrated that I have to spend any of my precious patience on others when I need it for my children. Then I come back around to the higher thought. What can I say? I’m a work in progress).

Now That You Understand a Bit More

Assume that the choice to homeschool is made out of love—most of us fall into that category—and I’ll assume that your schooling choice is made out of love, too. Every parent needs genuine support. There’s a lot of negativity that we’re up against on a daily basis. We don’t need to be offering out more negativity in the form of skepticism. We can offer each other support (even in passing) by knowing that there is no one schooling choice that is right for everyone and that we do not know what is best for other people’s children. Best for others doesn’t have to look like best for us and vice versa.

When you hear that someone is homeschooling their kids, instead of being concerned about whether they fit into a small percentage of folks who could socialize more, rest easy about the topic. Homeschool is fascinating—it would be a shame for you to miss out on learning about it by limiting the conversation to socialization. Instead of showing concern or inadvertently implying that they aren’t doing enough, try showing interest. A response of “Awesome! I don’t know much about homeschooling. Do you love it? What’s your favorite part about it?” is going to open up the conversation and allow for genuine learning and connection.

If you do meet a homeschooler today, ask them what they’re learning about Groundhog Day—chances are high they dove into the subject and can share some fun facts with you. And honestly, that interaction in and of itself IS socialization. If you just can’t shake your concern, this is your chance to be part of a positive social interaction. We could all use more of those.